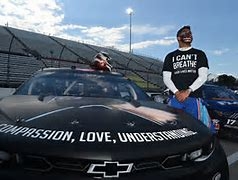 In the momentum of recent events and major corporations pushing for racial equality the sport of NASCAR has aligned itself with the Black Lives Matter movement. I was never a fan but I was always aware of the fanbase not being very welcoming to African-Americans. Hence why we haven’t been racing to attend or root for participants who don’t reflect the people in our community. But what do you expect? The sport was born in the south and has strong ties to its southern fan base. Most recently, Bubba Wallace felt he was the victim of a hate crime due to a “garage pull” being fastened in the form of a noose. The FBI and NASCAR investigated but have concluded that no hate crime was committed.

African-Americans make up roughly 8% of NASCARS fan base so I commend whomever is responsible for attempting to move  the sport in more of a diverse direction. Here’s a slideshow of some notable Black Drivers with their pedal to the metal.

I don’t know about y’all but I was never interested in the racing sport. I always enjoyed playing racing games on gaming consoles but that was as far as my enthusiasm went. Hopefully the industry can continue to move in a positive direction and be more inclusive to other cultures. As we continue to progress towards a better America I love to see things like this.